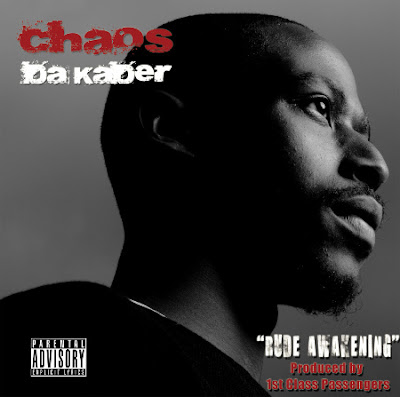 Copy & Paste To Your Search Engine: 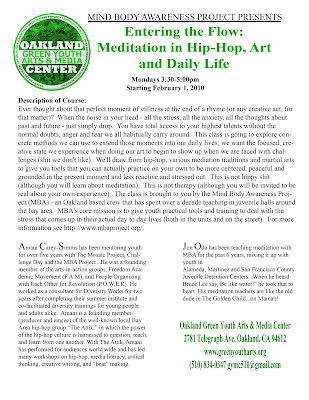 The Dream In Action Next Thursday 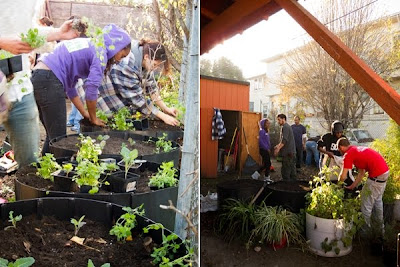 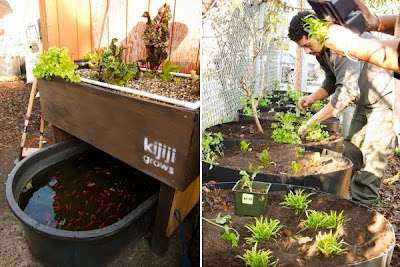 Well… you wouldn’t know it by the late hour of this Monday post, but I worked ALL weekend. Yes indeed… I’ve been a busy little bee and I’m excited about a lot of the upcoming posts. So please stay tuned…

As I mentioned last week, folks are gearing up over at the Oakland Green Youth Media & Arts Center for their big grand opening this week… Thursday, January 14th. It’s been a whirlwind of activity over there, and even though I’m late jumping on the bandwagon (they’ve been working for literally years to achieve the realization of this center), I won’t be shy about singing their praises.

Thursday of last week was a big day. Not only did the mural project I’m documenting get underway (Spoiler Alert: I’m making my first movie!), but a large crew of volunteers, headed up by Tondre of Oakland organization DIG Cooperative, worked furiously to install a community garden behind the Center.

The focus of DIG Cooperative is all about water… water-smart homes and water-smart gardens. While speaking to a completely engrossed audience of Oakland youth, Tondre discussed the need for water-wise behavior moving into the future, given that we live in a region whose population is expected to double before then end of the next century.

“The number of people are going to double. But the amount of water is going to stay the same.”

He discussed the healing benefits of green space… the need for a place of peace and quiet, a respite from the onslaught of sensory noise we are subjected to every day in our urban environment. The garden will also contain a sacred altar space to commemorate all of the fallen youth of Oakland, victims of violence.

What’s amazing about this garden is how much they are accomplishing in an exceedingly small space. In fact, the entire garden is installed on top of concrete/asphalt in what was once, presumably, a small parking area. I love this. I had to resort to the same sort of creativity in creating a sidewalk garden in my concrete surrounded home in West Oakland… I used recycled wood crates and boxes from Urban Ore as large planters on top of the sidewalk. The Youth Center has set things up similarly with raised beds built out of wood, and even simpler “instant” pop-up planter beds made out of re-purposed plastic bamboo root barrier systems. Genius.

Additionally the garden makes use of aquaponic gardening (a union of aquaculture and hydroponics) through the assistance of Kijiji Grows, a collaborative group of farmers, artists, engineers, builders and educators working to change Bay Area lives through urban sustainable growing systems in schools, homes and businesses. Aquaponics is especially effective in areas with little space or access to healthy soil… the plants are grown without soil, utilizing the organic fertilizer produced by the fish (fish poop!), with minimal water usage, and absolutely no pesticides. Kijiji’s aquaponic kits make great classroom laboratories, useful for demonstrating principles of math, science, technology, and critical thinking. They believe their greatest impact can be made in teaching the next generation to be good stewards of the Earth.

The garden installed last week is considered Phase I, and there are extensive plans for Phase II to be accomplished throughout 2010. These include rain catchment and gray water recycling systems, removing the asphalt/concrete and establishing plants in the ground that will repair the health of the soil.
Posted by Green Youth Media Arts Center at 1:53 PM No comments: 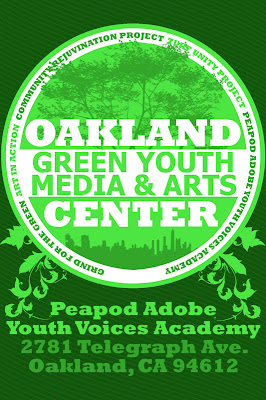 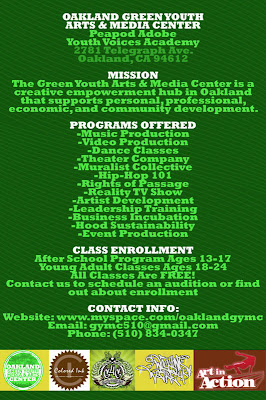